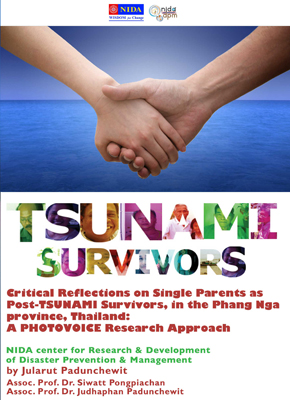 On December 26th, 2004, the wrath of Tsunami, one of the biggest disasters in the history of Thailand mercilessly hit Bann Nam Khem, a small and serene fishing village and its adjacent hill mining areas in the Phang Nga province, the epicenter of the destruction, causing incalculable loss of thousands of lives.
This study explores the Post-Tsunami traumatic experiences of the 12 single-parent families recruited through the snowball sampling technique. To note, the Photovoice technique, a participatory action research strategy, initiated by Calorine C. Wang, Mary Ann Burris (1997) was specifically applied to capture how these targeted groups, either be it villagers, volunteers, community leaders, convey the sense-making of their lived experiences as lived as single mothers or fathers. Each family was asked to be reflective and to brainstorm about the emergent themes of their lives before translating their perceived reality into photographs as taken, using a digital camera provided by the team of researcher to accomplish the research tasks.